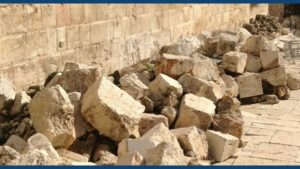 Legend has it that Napoleon was once riding through Paris (others say: through Vilna) when he heard crying and lamenting voices from a synagogue he was passing. He had his entourage inquire what had happened and they brought back the message that the Jews were mourning about the destruction of their Temple. Napoleon was astonished: “Which temple? When was it destroyed? Why I hadn’t been informed about this?” But it turned out that this had happened more than 1,700 years ago, in Jerusalem.[1]

While it is questionable whether this story ever happened, it is true that on that 9th day of the month of Av Jews all over the world sit on the floor of scarcely-lit synagogues, read the lamentations of the prophet Jeremiah and others in a wailing tone, and fast the entire day, mourning the destruction of the First and the Second Temples in Jerusalem and the subsequent scattering of the Jewish people into Galut (exile).

What shall we do with this tradition? Not only Reform Jews find it hard to mourn about something that happened 2,000 years ago and doesn’t constitute a personal loss. We aren’t in this mindset of destruction any more: Over the centuries Judaism had found new forms of belief and prayer, other ways of ensuring the continuity of Jewish life without the Temple in Jerusalem. The mourning over the destruction of Beit Mikdash and the Holy City faded away and turned into a kind of phantom pain. Therefore the tradition evolved to include other tragic events into the mourning of Tishah Be’Av, as a reminder of the oppression and powerlessness of life in Exile: The expulsion of Jews of Spain, the outbreak of the First World War, the beginning of the deportations from the Warsaw Ghetto to the death camp of Treblinka, even the arson in a synagogue in Exeter (Great Britain) in 2018, and many more. Also in Berlin we add to the traditional lamentations poems of Paul Celan and other contemporary Kinot.

But still, commemorating Tisha Be’Av today while Jerusalem is the rebuilt, vibrant capital of the sovereign State of Israel seems to be detached from our reality. Yet, this day doesn’t only focus on calamities which were brought from outside over the Jewish people. Our tradition preserves a strong strand of critique of strife and hate within Israel itself. The Babylonian Talmud (Gittin 55b-56a) tells of an episode of selfish, irresponsible behavior and a lack of tolerance among Jews. And in this situation of tension the rabbis are described as bystanders, a failing leadership lacking a moral compass and a longer historical perspective. The Talmud concludes that because of Sin’at Chinam, this senseless hatred, the Temple had been destroyed.

We don’t long for the rebuilding of the Temple with its sacrificial cult anymore but we do relate to what the rabbis put on the spotlight on Tisha Be’Av as a remembrance and warning against the self-destructiveness of inner-Jewish strife. I am writing this text in Jerusalem on the 17th Tammuz, the day we commemorate the breaching of the wall of the city. Today we live in a time of tension and bitter strife among the streams of Judaism, between Israel and Diaspora Jewry, the lack of religious pluralism in the Jewish state, and danger to the Israeli democracy. The brave “Women of the Wall” who come to hold Torah services at the Kotel every month are exposed to verbal and physical violence again and again. The city of Jerusalem is more beautiful than ever but it is torn by religious, political and ethnic divisiveness, a sort of breaching the walls once more. There is a tremendous loss that also we as Reform Jews have to mourn: It is the apparent loss of a unifying vision of how the rebuilt Jerusalem of today can become a space of redemption. Power struggles, segregation and racism make people adhere blindly to their own truths, without striving for a broader vision and for reconciliation.

Following its Haftarah, Shabbat Devarim is also called Shabbat Chazon, the Shabbat of the Vision. The prophet Isaiah (1:3) laments:

“Israel does not know,
My people takes no thought.”

The traditional liturgy of Tisha Be’Av preserves 2,000 years of yearning for a rebuilt, redeemed Jerusalem. Joining those mourning rituals could help us finding a common language, the remembrance of our shared history might lead to a clearer vision of our values for the future. The Mishnah (Pirkey Avot 5:7) recalls ten miracles that happened to our ancestors in Temple times. One of them was: “No one complained: ‘It is too crowded for me to lodge overnight in Jerusalem'”. The Jerusalemite Rabbi Tamar Elad-Appelbaum translates this into a vision for today:

“This is Jerusalem’s appointed role in history, to be rebuilt until it becomes a space in which there is no constriction – a place where any individual in the world can enter the gates standing tall as an individual and as a bearer of his or her people’s tradition, in a spirit of reconciliation and peace.”[2]

So, now one day of fasting and mourning, and then again back to work towards a pluralist Jerusalem that is a peaceful home for all its inhabitants and visitors, regardless of their belief, nationality and origin!

Please fill out this form to share "Visions for Jerusalem | Parashat Devarim" via e-mail.