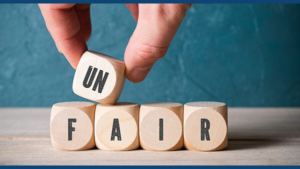 Is fairness learned or is it innate? In a study of capuchin monkeys, Professor Frans de Waal showed that monkeys understand the concept of fairness[1].  In the experiment, he placed 2 monkeys in clear cages side by side.  The monkeys needed to hand the experimenter a rock. In return, they received food.  The first monkey handed the experimenter a rock and received a piece of cucumber.  The monkey in the next cage did the same thing. Instead of cucumber, he received a grape.  It turns out that monkeys much prefer grapes to cucumbers. The first monkey saw the grape and went to hand the rock and, once again, received a cucumber. According to a basic idea that animals should be satisfied with the food they receive, the monkey should eat the cucumber.  But, this time when he received the cucumber, he looked at it and threw it through the bars of the cage at the experimenter. As the other monkey continued to receive grapes, the first monkey shook the cage, banged on the floor and displayed anger at this injustice. This experiment teaches that fairness is not just a human idea, but that fairness is part of the basic structure of the world.

This week’s parashah, Matot-Masei, challenges this idea of fairness.  In Numbers 31, we see that God commands Moses to wage war against Midian. In Numbers 31:7-8, we find a description of the war:

“They shall deploy against Midian, as Adonai had commanded Moses, and slew every male.  Along with their other victims they slew the kings of Midian: Evi, Rekem, Zur, Hur, and Reba, the five kings of Midian. They also put Balaam son of Beor to the sword.”

This sounds like a pretty bloody battle and one in which the Israelites accomplished their goal. Not only did they kill all of the males, but they also specifically eliminated the royal leadership. This would appear to be the end of the battle. However, after the warriors return, they find an enraged Moses.  In Numbers 31:15-16, Moses says,

“…You have spared every female! Yet they are the very ones who, at the bidding of Balaam, induced the Israelites to trespass against Adonai in the matter of Peor, so that Adonai’s community was struck by the plague.”

Moses then charges them to return to Midian and slay all of the women who have “known” a man carnally (Numbers 31:17-18). And, so they did.  They went back and killed all of the women.

Is this fair?  Is it fair to finish a war and then return to eliminate more people?  One could simply say, “All is fair in love and war.”  The Torah even gives a justification for why the Israelites must go back. They have to show vengeance because of the previous episode in Numbers 25 where the Israelites worshipped the gods of Midian after being tempted by the Midianite women.  Their gods and their women are just too tempting and must be destroyed.

But later commentators were not comfortable with this explanation.  In the Mishneh Torah Laws of Kings and War 6:7, Moses Maimonides wrote:

“When we besiege a city which we want to capture, we do not encircle it from all four sides, but only on three. We leave one side open for them to flee. Anyone who wishes to escape with his life may so do, as it says, “They shall deploy against Midian” (Numbers 31:7)….”

Maimonides is picking up on the meaning of the word “deploy.”  Deploy shows a strategic maneuver, not just an act of war. The Israelites provided them an escape route.  This way, those who were killed or captured were the ones who were actively fighting for the cause, not the ones who happened to be stuck in the unfortunate circumstance of a war.

But still, is this fair?  The Israelites had already defeated the Midianites.  Was it fair to go and kill these women, even if they had chosen not to run? From my vantage point, I would say no.

This is the tipping point of the story.  When does the fighting move from appropriate action to a moral question of fairness?  When we look at the examples of the monkeys, we can deduce that part of it is personal perception.  The monkey who received the cucumber immediately perceived injustice.  Applied to the parashah, this would mean that the victim determines the injustice.  But, the victim is not telling the story. In this case, the victim is dead!

The explanation from Maimonides does offer a bit of insight that the Israelites allowed for escape and those who were killed or captured “deserved” their fate.  But there is a greater lesson here to keep in mind for this day and age – we need to be on alert of our moral actions and their ramifications. The tale of the war against Midian can serve as a cautionary story. We need to be aware of our behavior to make sure that our actions align with the moral vision we have of ourselves. When we receive grapes, we need to think about those receiving cucumbers.  We need to notice the injustice and create a world built on fairness.

Please fill out this form to share "Fairness Awareness | Parashat Matot-Masei" via e-mail.