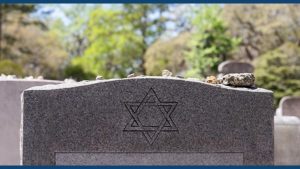 Most people I know would say that death is frightening. While Judaism has notions of afterlife, these are not emphasized.  However, we do have extensive literature on the mourning process.

In this week’s Torah Portion Chukat, we confront death not once but twice. We face the death of two out of three of the Israelites’ beloved and trusted leaders – Miriam and Aaron.The description of Miriam’s death is one line at the beginning of the portion (Numbers 20:1), “And the children of Israel came, the entire congregation, to the wilderness of Tzin in the first month and the people sat in Kadesh, and there Miriam died and she was buried there.”

That’s it. That’s the entire description of Miriam’s passing.

At the end of the very same chapter, Aaron dies.  His death is described very differently.  First, Moses is told of Aaron’s impending death and given instructions for a ritual to carry out before Aaron dies.  Moses follows the instructions, as it is written (Numbers 20:27-28), ”…And they went up to the top of the mountain before the eyes of all the congregation.  And Moses stripped Aaron of his clothes and he dressed Elazar his son with them, and Aaron died there at the head of the mountain, and Moses went down, and (also) Elazar, from the mountain.”  We are witness to the people’s reaction to Aaron’s passing (Numbers 20:29): “And all the congregation saw that Aaron died, and they wept for Aaron thirty days the entire house of Israel.”   From this we have the tradition of the period of Shloshim, the first thirty days of mourning in which the mourners return to daily routine but do not participate in celebrations nor do men cut their hair or trim their beard.

Our Torah commentators take note of the disparity of the circumstances of Miriam and Aaron’s deaths.  Rabbi Yitzhak “Toldot Yitzhak”, who lived in the 15th-16th centuries, who himself overcame tragedy surviving the Spanish Inquisition in both Spain and Portugal, is upset with the people’s seeming lack of mourning over the death of Miriam.  In the verse following the announcement of Miriam’s death, it is written in the Torah, “And there was no water for the congregation”.  Rabbi Yitzhak claims that G-d stopped the water because the people did not cry for Miriam.  In other, words, since the people withheld their tears and so G-d withheld the water.

In a Torah study group that I lead in my congregation in Tzur Hadassah, participants suggested the possibility that the reason the people did not mourn Miriam is because they were in shock.  Miriam was the first significant leader to die.  She was beloved – as we know from Numbers 12:15 that when Miriam contracted leprosy, the entire camp waited seven days for her healing and did not leave her behind.  Therefore, when Miriam died, there was a kind of paralysis.  Immediately, the well dried up and they were forced to deal with a matter of their own life or death.  Regarding Aaron’s death, there was a preparation for the end – G-d tells Moses, the people see the procession of Aaron and his sons going up the mountain.

The fact that the deaths of Miriam and Aaron so close together teaches that death can come in different forms.  We never know exactly how a loved one will pass. Dath can come suddenly or slowly with time to bid farewell.  While it is very difficult to prepare ourselves for the death of a loved one, nevertheless, death is an important (and inevitable) part of life, and it is a topic that we must address amongst ourselves from time to time.

I also believe that the occasion of Miriam and Aaron’s deaths teach us that despite the finality of physical death, we are obligated to recognize the heritage that each person leaves behind and pass it down from generation to generation.

Rabbi Samson Rafael Hirsch, the voice of Modern Orthodoxy in the 19th century in Germany, reminds us to be mindful of the “presents” that Miriam and Aaron left to our people.

As such, a well-known tradition associated with Miriam’s death and the disappearance of the water, is that Miriam was the keeper of the well in the wilderness and provided all of the people with water.  Therefore, when Miriam died, the well dried up.  Miriam’s heritage to us is the spiritual teaching to be “fountains” to pump life into our people and all humanity, sometimes reaching to our very depths to bring it out.  Aaron is known throughout the Midrash as the one who always “pursued peace” and strove to bring peace and love among all the people at any cost.   (Midrash Agadah Chukat 20:29)

After reading about the passing Miriam and Aaron, we can ask ourselves the following questions:

How do we pay our respects when someone passes?

How do we preserve our loved one’s heritage?

What will be our heritage to pass down to0 future generations, both biological and spiritual?

We Reform Jews believe strongly in tikkun olam, that each of us is very important and is needed for the task of repairing the world, of bringing goodness into the world.  We speak often in my congregation in Tzur Hadassah – and in our wider community — about pluralism, tolerance, celebration, and mutual support.  When a member of our community is in distress, we organize to provide meals, visits, and prayer.   What could be a better heritage than this?

Let us all take part to create venues to speak about the difficult end-of-life issues.  And let us continue to create a heritage in our families, in our communities, and in our movement for future generations of the Jewish people.

Please fill out this form to share "Dealing with death | Parashat Chukat" via e-mail.