Virtually, the entire book of Leviticus imagines God speaking to Moses.  It is all instruction and no action.  One significant departure into narrative is a striking little tale begun in Chapters 9 and 10, the ordination of Aaron and his four sons as priests (kohanim) for the people Israel, and the disastrous action of two of the sons that lead to their fiery death. The story concludes six chapters later, with the Torah portion, Acharei Mot.  Depicted here—almost hidden among the thicket of priestly laws and regulations—is one of the most dramatic scenes in Torah: the first Day of Atonement.

This Shabbat has a special name. It is called Shabbat Ha-Chodesh, the Sabbath of The Month, the month being Nissan when we will celebrate the beginning of Jewish history, as we participate in the celebration of Passover, two weeks from now.  According to Tractate Rosh Hashanah of the Mishna Rosh Chodesh Nisan is one of […]

This Torah portion is known for its story of the Golden Calf, built when Moshe failed to return from the mountain on exactly the 40th day as expected. The people panicked, thought Moshe was dead, and that God had abandoned them. Aaron, ever the peace-lover, reasoned that the people needed a visible symbolic representation of God to reassure them.  The People were not denying the God of the first commandment, but rather broke the second commandment prohibiting the building of idols.  When Moshe returned with the tablets, he was indignant and smashed the tablets to show that the covenant between God and the Children of Israel had been shattered.

After the thunder and the lightning, the blare of horns and the smoking mountain, after the chaos and the ecstasy and the fear and trembling of the revelation at Mt. Sinai, we get the rules. Parashat Mishpatim is where we begin to move from the sweeping narrative of the Book of Genesis and the first part of the Book of Exodus to the more granular, specific, some-might-even-say overly detailed descriptions of laws and ritual that occupy most of the rest of Exodus and all of Leviticus.

Were we to compare our patriarchs’ impact on Judaism, Isaac would be a distant third.  First place is a tie between his father Abraham, the champion of faith and hospitality, and his son Jacob, the spiritual wrestler. Isaac’s problem lies in how few columns in the Torah are devoted to him. Other than having survived the trauma of the Akedah, the information in parashat Toldot, is basically it. Isaac is best summed up as his father’s son and his son’s father. Like Abraham, Isaac experiences a famine and has his wife taken by a king. Like Jacob, Isaac’s future wife is discovered at a well. Even in Toldot which begins: This is the story of Isaac, son of Abraham. Abraham begot Isaac, the focus shifts in the very next verse to what will develop as Jacob’s story rather than the tale of Isaac.

We are living in an age when the news is filled with demeaning language and accusations of impropriety in the workplace. Whether it is well-known newsmen, movie moguls or politicians, women are treated as objects and worse. Many of the men assume their positions of power will keep them safe and insulated from accusations. While women who speak their mind are threatened, ridiculed and in some cases fired. It does not matter where you live—North America, Israel or Europe –women are fighting for dignity and respect.

Imagine Abraham’s surprise!  There he was, minding his own business, resting in his tent in the hills near Hebron. Suddenly, God appears to Abraham. Without warning and without explanation. Looking up, Abraham sees the dust rising in the distance, and soon a group of strangers approach his tent.  Without hesitation, Abraham leaps to his feet, ignoring God, and ignoring the pain he feels from his recent entry into the covenant with God through circumcision, and instead turns to these visitors. 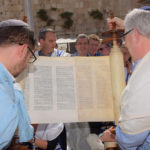 Noah was destined to be neither the father of the Jewish people nor the founder of our faith. Though the most righteous one in his corrupt generation, he failed to reach out and save human lives besides those of his family. Thus, the Rabbis who were aware of Noah’s disturbing limitations in the terse yet […]

Parashat Ki Teitzei contains the most laws of any Torah portion, seventy-four, more than one tenth of all the laws in the Torah, but it is also a good reminder that for the development of the halachah, Biblical law was just a building block. For example, the somewhat confusing law, that one must place a parapet on one’s roof; (Deuteronomy 22:8) not only becomes the basis of the Jewish equivalent to OSHA (Occupational Health and Safety Administration) regulations, but also is used by more contemporary authorities to develop a Jewish legal objection to second hand smoke. (OU Israel, Aliyah-by-Aliyah Parashat Ki Teitzei).

Please fill out this form to share "74 Laws and Yet It Is Not Enough – Parashat Ki Teitzei" via e-mail.