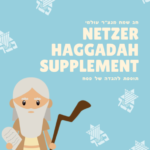 What is the single most important thing we can have at our Passover table?My father would argue that it is my late Bubbe’s Wine Cake. When I was little, I might have said that it was the maror to go on top of the gefilte fish. A gardener might focus on the karpas, with its greenery and symbols of spring. My rabbinic colleagues might say it is the Matzah.

Who will we remember? Parashat Tzav (Leviticus 6:1-8:36) / Shabbat Zachor 5771-2011 By Rabbi Robert H. Loewy, Congregation Gates of Prayer , Metairie, LA, USA This is the week that Jews around the world are preparing for Purim. Shelach Manot gifts are ready for delivery. Costumes are prepared. The Purim shpiel is in final rehearsal and […]

Sukkoth and the challenge of refugees Recent Issues By Rabbi Michel Schlesinger A young man came to a rabbi for a chat. “I’ve bought a new car” said the young man to the rabbi. “Congratulations”, he replied. And the young man went on, “It has been a while since I have been saving to achieve […]

Temporary Homes, Permanent Homes: Reflections for Sukkot by Rabbi Danny Burkeman , The Community Synagogue , Port Washington, NY Many of you will know the story of the three little pigs, each one of whom built a home; one out of straw, one out of wood and one out of brick. A wolf came along […]

Torah Commentary for Chol Hamoed Sukkot (Kohelet) by Rabbi Dr Charles H Middleburgh , Director of Jewish Studies at Leo Baeck College , London, and rabbi to the Cardiff Reform Synagogue in Cardiff, Wales. Remember now thy Creator in the days of thy youth, while the evil days come not, nor the years draw nigh, when […]

Chol HaMo’ed Sukkot 5771 (Exodus 33:12-34:26) by Rabbi Lawrence A. Englander During Sukkot, I sometimes find myself meandering down the aisles of my local hardware store in search of glue, screws, and hinges to repair my disintegrating sukkah that I first built years ago.  After all, no sukkah is meant to last forever.  But what […]

Think Globally, Act Locally, Do it Together / reflections for Yom Kippur 5772 by Rabbi Mark Goldsmith, Alyth , North Western Reform Synagogue, London; Chair of The Assembly of Reform Rabbis UK It is not certain who first used the phrase “think globally, act locally”.  It became widely used from the 1970’s onwards as the environmentalist […]

Tekiah, Shevarim, Teruah / commentary for Rosh Hashana by Rabbi Michel Schlesinger, Congregação Israelita Paulista (CIP) (for the Portuguese version, please scroll down or click here ) Of all the symbols related to the High Holidays, the shofar is the one which draws most of our attention. This ancient musical instrument was used in biblical […]

How many lies are contained in the phrase “A mosque at ground zero”? Erev Rosh HaShana 5771 by Rabbi Gary M. Bretton-Granatoor, Vice President, World Union for Progressive Judaism / Congregation Da’at Elohim – The Temple of Universal Judaism, New York City There is something very strange and wonderful about this scene.  In fact, what we […]

Please fill out this form to share "Torah from around the world #32" via e-mail.